Last Saturday we went to Eton & Windsor. I’m really not so into the British royals thing. But Karen’s mom had trumpeted the virtues of the palace, and the guidebooks made it sound like a cute town, so I figured there would be some good shopping, even if the touristy attractions were a bust.

Turns out the palace is awesome. A bit expensive, so if you go definitely buy the combo rail tix & castle admission. The audio guide (which fortunately comes with price of admission) is really well done. And we were there just before the closing of the semi-state rooms to the public, so we got to see all the gaudy absurdity of the rooms the Queen actually uses to host guests. Awesome. 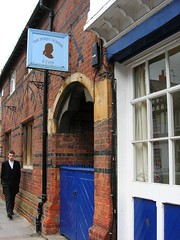 Though it was a bitterly cold and windy day, we took a stroll across the Thames to see picturesque Eton. We hoped to catch a glimpse of at least one pubescent lad in his tailcoat and regalia. . . instead we were rewarded with a campus teeming with dudded up young boys. It was straight out of a movie. And many of them did it up in style, lots of indie-rock-looking Elijah Wood/Kieran Culkin types.

The most interesting thing was that Karen’s typical disgust with such elitist educational institutions manifested itself not in disinterest or disdain, but intense voyeuristic fascination. In fact, I had to stop her from taking several shots of the students that would’ve been not just invasive but downright creepy. I’ll post a couple of her choice shots soon, though.

We help you sharpen your message and get it to the audiences you most want to reach.