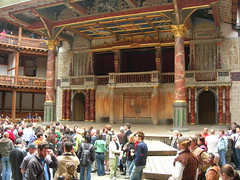 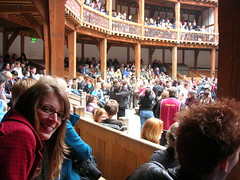 Don’t tell me you didn’t watch “Fresh Prince of Bel Air”. I know, none of us actually watched “Fresh Prince”. . . Nonetheless, you all remember the family’s butler, Geoffrey. Well, our good friends Beth & Sam visited and their gift to us for putting them up Goodenough-style was tix to Shakespeare’s Globe Theatre (this included renting us seat-backs for the 16th century benches. . . thanks, Sam!). And yes, we saw Geoffrey the butler.

The production was Coriolanus (in the play, Geoffrey the butler pronounces it core-ee-oh-LANE-us). Not one I’d read before, but topical: a leader full of hubris fails to recognize the importance of connecting with and responding to the needs of the people. Of course, any analogies to W stop there, since Coriolanus himself was also a brilliant military man who had duly earned his stripes on the battlefield, and there is something admirable about his unwillingness to succumb to the glad-handing and doublespeak of politics.

Productions at the Globe are definitely worth checking out. Not only is the production top-notch, but there is a rowdy unpredictability in the open-air theatre. Actors mingle in the audience—indeed the play’s tragic climax takes place right in the middle of the crowd—and audience members come and go freely, eating and imbibing pretty much whatever they want, whether purchased from the Globe’s many vendors or brought in from the Starbucks across the street (Willy would be proud). I think next time we’ll definitely bring a picnic lunch and a couple of pillows to sit on. . .

We help you sharpen your message and get it to the audiences you most want to reach.